Violence is an aggressive force used to damage someone to get some benefit from the act physically. Frustration, a lack of affection, an abusive background, and rumors can lead to violence. Assault, rape, and murder are all examples of violence. On the other hand, violence can never be a response to anything. Those who have been violent or who have been victims of violence have all agreed that violence is never a choice. Here we will offer some violence quotes to motivate you not to participate in violence-related activities. 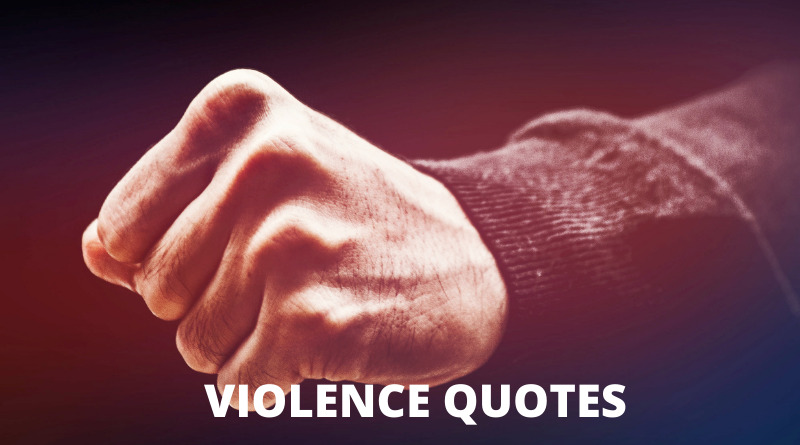 Revenge which transforms into violence does not stop once started. The cycle of anger, fear, and violence continues until the end.

People may think that justice can only be brought by violence, creating pressure, and torturing people. But that’s not true. Violence can not create anything. If social justice is to be there, violence needs to leave the room.

“Violence is the weapon of weak, non-violence that of the strong.” ~ Mahatma Gandhi

Violence can never be a language of strong people. Strength is not shown in starting the war but in bringing peace without war. Hence, non-violence is the only way to show strength.

Violence can never be started on itself. We fear violence and create illusions that make it more dangerous and chaotic in places.

“Until we stop harming all other living beings, we are still savages.” ~ Thomas Jefferson

Violence may be the answer to your hate. You can kill the haters, but it does not kill the hate. The hate gets perpetuated and returns in a cycle to you.

“Poverty is the worst form of violence.” ~ Mahatma Gandhi

Violent people are suffered from poverty. They are devoid of one or the other thing. Either they suffer from starvation or do not get a proper education.

“If you give me any problem in America I can trace it down to domestic violence. It is the cradle of most of the problems, economic, psychological, educational.” ~ Salma Hayek

True enough! Violence, or anything for that matter, starts from family. After all, charity begins at home, and so as violence. If a child sees violence at home, they will take it everywhere.

“Violence does, in truth, recoil upon the violent, and the schemer falls into the pit which he digs for another.” ~ Arthur Conan Doyle

Violence comes crawling who has started it. Those who think violence can vanish all the problems and bestow peace on earth will suffer from their violence.

“I believe that order is better than chaos, creation better than destruction.” ~ Leo Tolstoy

The destruction brought by violence can never be stopped. People need to learn to create without inciting violence to the ground. Creation does not always demand violence.

Darkness can not bring light to it. In the same way, violence can only bring violence with it, not love and peace. Peace can come with creativity, with love.

“Comparison is an act of violence against the self.” ~ Iyanla Vanzant

Self-comparison has created more issues than ever. We forget that we all are unique in some way and that not all of us can do the same thing. We all have our way of leading life to fighting our obstacles. Answers can not be the same because, in life, every question is different. And comparing brings hate, and hate brings violence.

Humans are complex! We do what we know is wrong and love what we can not do. We know violence will not take us anywhere, but we keep destructing society with violence.

“Violence is the language of the unheard.” ~ Martin Luther King III

People who have never got a chance to speak show their desire, give their dreams wing, and grow angry. Their anger takes the form of lava and bursts out one day. And that lava can destroy everything, as violence does.

“Our society has gotten to the point where we might soon become less and less shocked by any kind of violence.” ~ Stanley Crouch

Yes, we have indeed become more violent than ever. No amount of talking about peace can reduce violent acts. And this violence is everywhere. Either racism is killing people or poverty. Nationalism is also getting indulged in violence- leaving us with no patriotism. It feels like violence is in the air!

It is possible for individuals who have been subjected to several violent sufferings in their life to become violent. On the other hand, violence does not foster creativity, pride, or harmony, as demonstrated throughout history. Nonetheless, we continue to experience violence in many aspects of our life. Violence has done more damage than good. And after reading all of these violence quotes, you must have grasped the idea.

What Is The Best Way To Run Windows 7 On Mac?

GHAZIABAD: A property dealer became arrested after taking place bundles of receipts as wads of notes really worth Rs. Sixty-five lakh to a vendor, the...
Read more

BTS arrived for his or her first ever UK indicates via non-public jet. They used it on the US leg in their global excursion...
Read more